My Camera is on the kitchen table

I ran out the door quicker than I should have, and as I was driving down the road to hear Lewis Kemper speak, it suddenly occurred to me:  "My camera is on the kitchen table."  That thought would come back to haunt me.  I had meant to grab it on the way out, but sometimes these things happen.  I got delayed leaving home, and still had at least three visits to make before the 4 p.m. talk.  Mr. Kemper gave a nice talk on how his career unfolded along with a nice showing of some of his work.  Then at the end of his talk, he unexpectedly issued an invitation to all present to join him for an evening shoot at the state capital.

I don't know about you, but its not every day that I get to work alongside a world class photographer.  Even though I didn't have a camera, I reasoned I could just tag along and watch him work.  After all, just to see what he does, how his mind composes a photograph would be an inspiration.  That it was.  A Q&A with him and looking at the LCD on his camera was very revealing.  I might add that it also was very re-assuring!  Given the same common location and situation, he and I composed the frame very similarly.

When I asked this much-published nature photographer what he did when confronted with common scenes such as the state capital building, he said "I just try something most people wouldn't do.  I used a 17mm Tilt-Shift lens" to get both the dome and the bell on the same plane of focus.  While framed nearly the same as most people who visit the capital, his shot was certainly distinct.

At the reception, I must have looked dejected when I told a fellow club member that I had left my camera on the kitchen table.  "No problem!" she replied, "you can use one of mine."  My day was brightening up!  Then she listed off what she had available, and one particular camera piqued my interest.  "I'll take the converted 20 D" I told her.  I had been wanting to try IR photography for several years, and this was my shot!  I shot the evening with an IR camera and a kit lens.  I had forgotten how difficult a 20 D could be.  The screen is small and AF slow, but it was a joy to use.  The best camera to use is the one in your hands!

I have wanted to try Infrared Photography for some time.  The way it renders black and whites is distinctive, and the leaves and spring flowers on the trees at the capital would really set things off.

Sunset on the Capital

Except the flowers had not yet bloomed, and the trees were not covered in leaves.  That turned out to be a good thing for this shot!  Learning to see the world in IR was what this night had become for me.  One of the things I learned was that you really don't need a speedlight, a flashlight works wonders!  and if you can paint with it, even better

Later, on the UC side of the river, he and I saw the same thing at literally the same moment .... the only difference was that he had the lens to capture that moment with him. 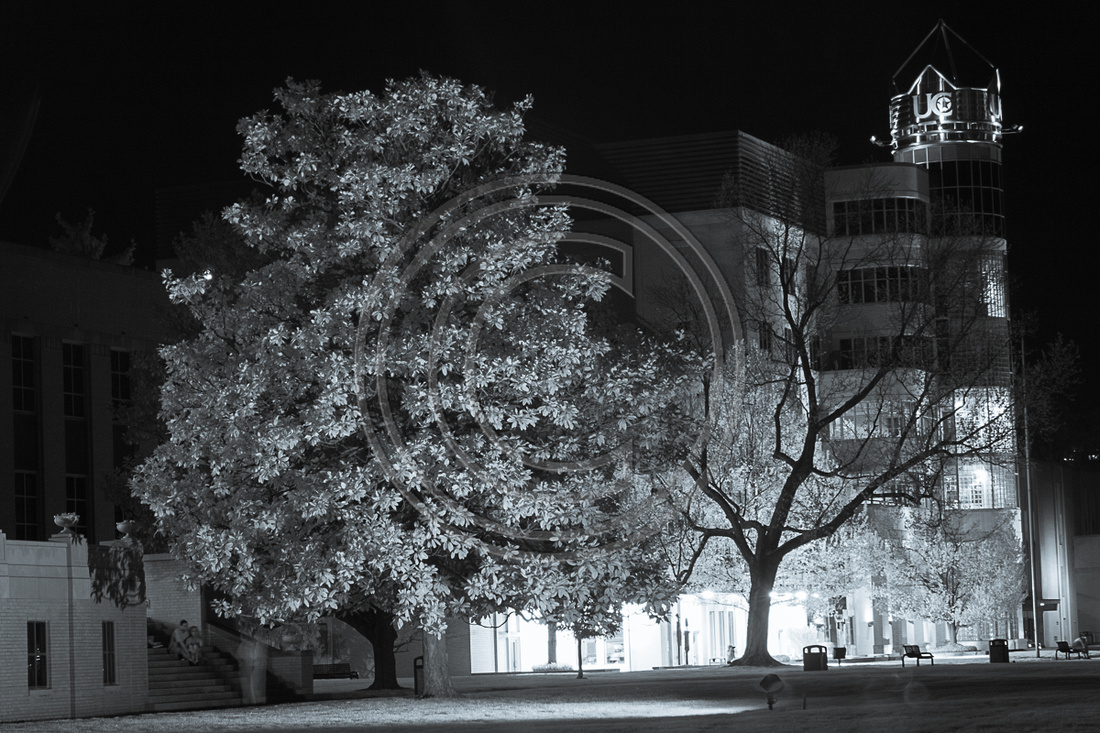 My initial experiments with IR photography have really sparked an interest.  I think I am going to have to save up for one of these!