How do you incorporate ideas into your photography?  Photography is a visual means of communications, and many of us want that communication to be quite literal.  We like pictures of our smiling children playing with thier young canine friends.  I recently took on an assignment to photograph a "part of the whole," and used a piece of history do so. 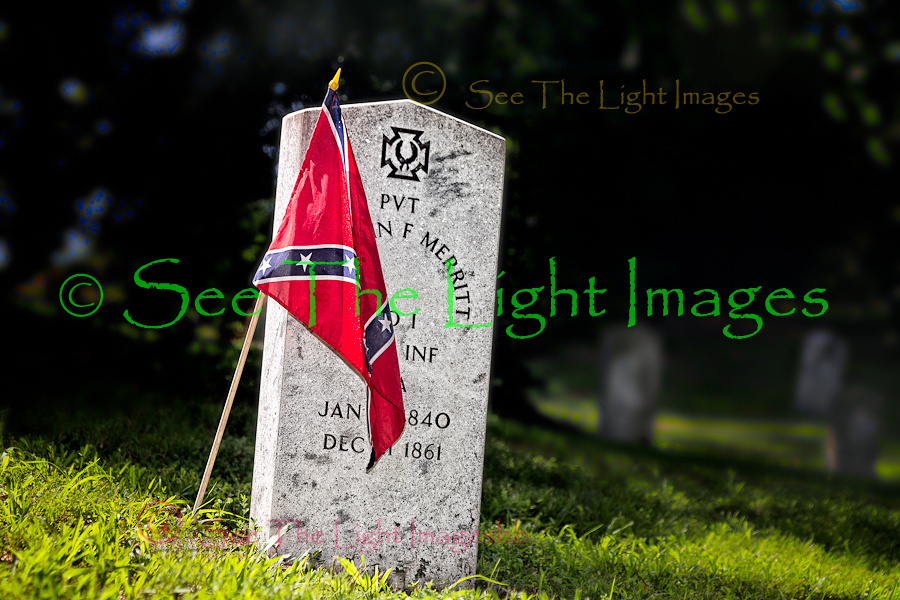 With the theme "Parts of the Whole" in mind, what do you see?

When the image was presented, some thought perhaps the tombstone was only part of the whole cemetary.  That was about as far as the assembled group managed to see the theme.  Allow me to explain why I selected this image:

Parts of the Whole echoes through this image both literally and figuratively, and may well be an insight into the collective imagination of our country.  The literal display of parts includes the obscured tombstone:  you cannot see the entire thing, nor can you see the entire name or even dates of birth and death.   Even the flag that blocks the details can only be partially seen because it is curled over upon itself.  The back - side light is only partially visible ... notice the prominence of shadows in this image echoing the tombstone's symbolism of death.  Of course, it is only a very small part of this cemetary, much as the Private is only a small part of the entire army he was fighting for.  All of these literal elements are right in front of your eyes.

But the literal interpretation is only the beginning.  The image was taken at Hollywood Cemetary in Richmond, Virginia.  On my recent visit there, I was impressed with how dearly the citizens there hold on to thier Civil War memories and heritage.  Yes, this to me that it not be made into a moody presentation, that would obscure the vividness of the the conflict that is so real to the people of this region.  To them, it is not something that happened in the distant past, but a very present reality that continues to shape who they are.

How is it that this young soldier, killed in battle 150 years ago is still so magnificently cared for?  Certainly this young man's life was more than "soldier."  The lawn is meticulously mowed, the flag carefully placed, and the marker looks as though it could have been planted this year.  We can say what we want about "those southerners who hold on to the idea of the War of Northern aggresssion," but they do honor thier dead.  They do remember thier past.  "Remembering Our Past" was the title that I assigned to this photograph.  Speaking figuratively, this photo convicts each of us of our own prejudices, whether positive or negative.  That flag itself is a strong emotional component no matter which side of the idea it represents we might find ourselves.  Even the Confederate flag denotes a part of the whole, for though for a time our nation was divided, all who lived under that flag both before and after lived under another standard, the Stars and Stripes.  We tend to hold on to and treasure selected parts of our memory, both individually and collectively.  Some who have seen this photo were moved to tears when they recalled distant relatives lost in the Civil War long ago or even in recent conflicts around the globe.  It brings into consciousness the sacrafice that young men have been willing to make for thier country, which in itself is part of our whole history.

Images that are strongly composed rarely settle for the literal interpretation that we want to first assign to them.  The author wants us to see more, ususally something about ourselves or about an important cause.  The next time that you encounter a piece of art that you cannot understand, stop.  Try to understand the image in light of the things you do know about it:  What is the Title, What is the theme?  What is the apparent subject matter?  What is the author trying to say?  Then step back and let it sink in.  Allow the cognitive functioning that God gifted you with to churn about and see where that takes you.   You might just be stunned by what the photographer, the painter, or the sculptor is saying.  And if you are really lucky, you might learn something about yourself in the process!