Almost anyone who has ever tried to photograph basketball at anything below NCAA Division I levels has struggled with low light conditions that are inherent to high school gymnasiums.  Yes, they are bright enough to play the game and for spectators to watch, but our camera sensor (or film) is not quite as sensitive as our eyes.   I will admit that the newest Pro level cameras do a pretty excellent job, but still not quite there. 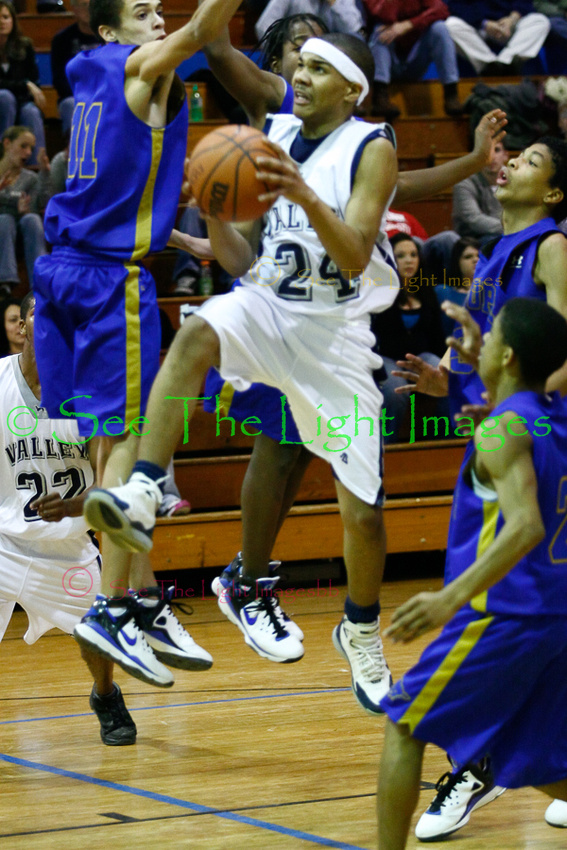 That is where sports strobes come in.  Those who have watched me develop as a sports photographer over the past few years have seen me use any number of different setups to augment the light at the venues I regularly shoot.  Each of these has brought varying degrees of success, and today I use whatever I think is going to produce the best result in the location I am shooting.

The first attempt to provide additional light to the caves called high school basketball courts came in the form of speedlites attached to the camera.  Of course that worked.  It also gave a very definite look.  The suject was bright, sometimes too bright, and there were the occssional weird shadows and persistent problem of red-eyes which meant more time spent after the game at the computer.   Not so much a good idea.  Besides, flash photography is not permitted on the baselines in the NCAA.  Even where it is permitted, I try to avoid it so that players and coaches cannot blame me when they miss their shots. 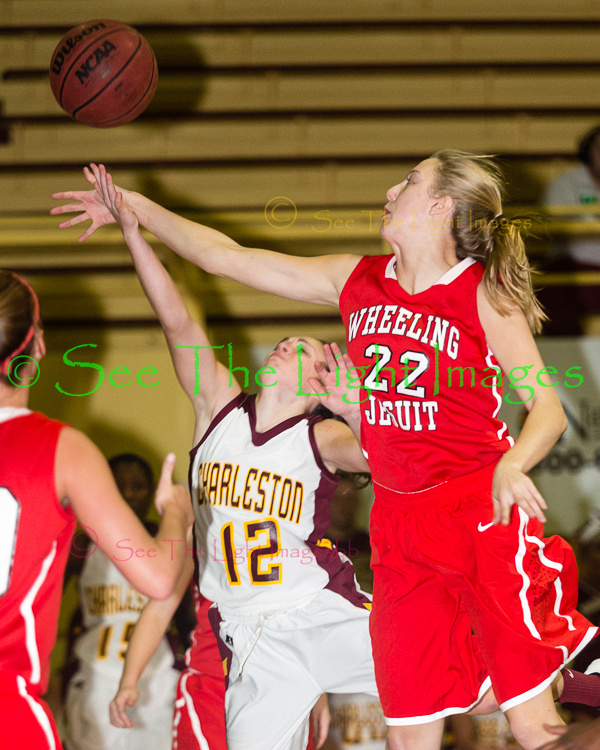 They say the devil is in the details. The detail here is that in order for flash photography to be effective in stopping action without ghosting, you need to be 2 1/2 stops above ambient. With on camera flash, your shutter speed cannot be fast enough to stop the action becuase your camera's sync speed is at most 1/250 of a second, and you rely on the fast duration of the flash to stop the action. Unfortunately, that often leaves the background falling into darkness and un-natural sahdows in order to achieve that 2 1/2 - 3 stop difference.  The alternative is to use the HSS mode to turn your flash into a fill flash at any shutter speed.  That works very nicely, especially in making colors consistent, but you have to use a faster shutter speed (1/640) to stop the action and a flash that will cooperate with you.  Notice in this shot how there is still motion blur in the fingers at 1/500 and softness because I am at ISO 3200, but the ugly shadow is gone. 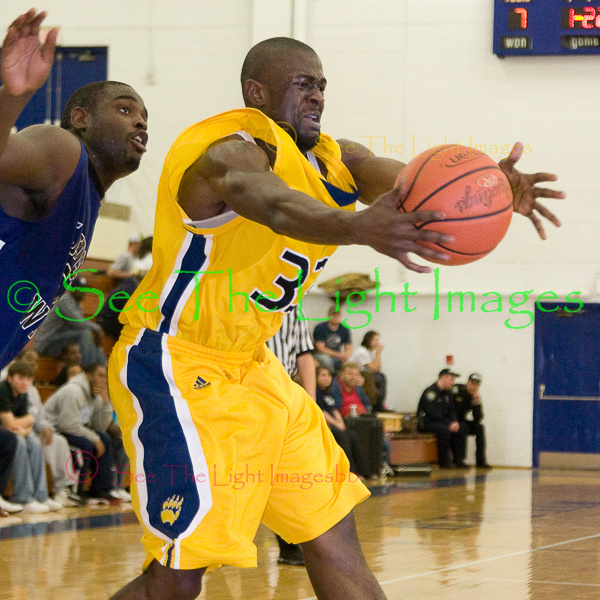 So I got the speedlights off camera with a radio trigger.  Essentially, that is what I have been doing ever since, with variations in lights used and their placement.  Due to limitations of the gym, I used to only be able to hang lights on the side that the spectators were on, and even at that, not always able to get them out of the way where I wanted them.  That always resulted in harsh lighting that came from one side.  In this shot, I am using two Canon 580's mounted at the same location, one pointed to the top of the key, the other aimed high at the wall to reflect some light.  Lots of problems with the image, AF didn't have enough light to work properly, and so it was often slow.  At ISO 1250, only the part lit by the flash is really legible.  The rest has lots of noise because it was brought up in Lightroom.  I just prayed that nobody would really look close to see how poor the shot was! 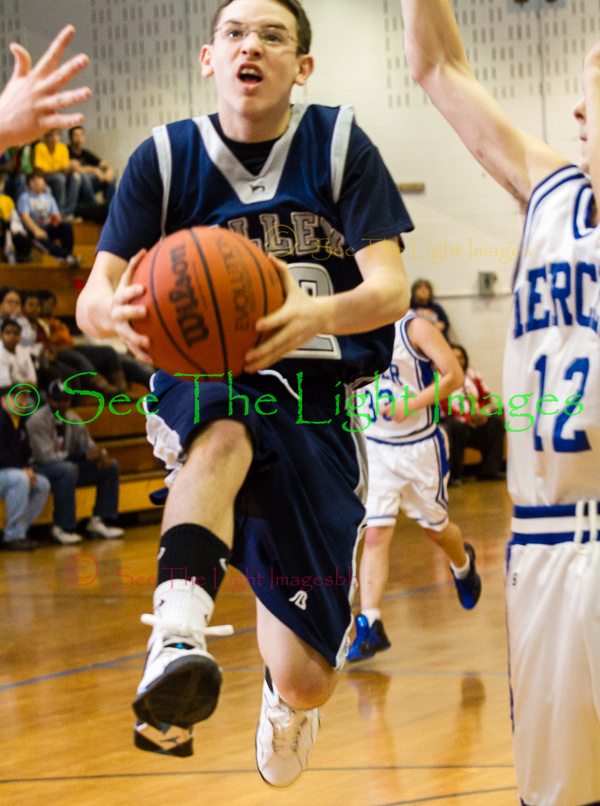 Sometimes it worked, sometimes not.  Pronounced shadows were a fact of life, and I was never really satisfied.  When I started using sport strobes, I had the power to light the whole gym by bouncing the light off of the ceiling.  That helped reduce the harshness, but I was still limited in what and where I could shoot using that light because of mounting locations.   For example, I usually was not able to get good cheerleaeder shots because they were on the side with the harsh lighting.  When I did shoot them, they were usually nuked. 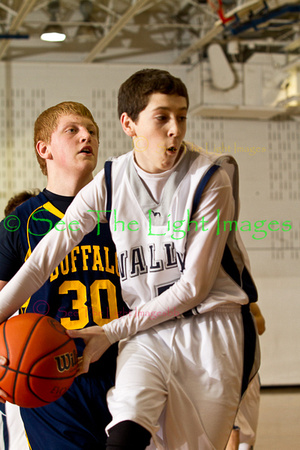 Next, I found a way to hang lights on opposite corners, and that made a huge difference.   I started shooting with two high powered sport strobes on opposite corners of the gym.  The lights are pointed at the ceiling at the top of the key, one with an 8 inch reflector, the other with a deep 11 inch reflector.  I started using the 11" deep reflector so as to avoid the flare of that light in my lens when shooting towards it.  The 8 inch allows me to have some hard light hitting the players while still reflecting light off of both the ceiling and the wall.  The end result is light that sculpts out detail without being overly harsh.  Having light on the far side means that colors are all vibrant and I no longer have a dark background.  It also means I have a backlight to give separation to my subjects.  Still have to be careful about shooting into the light, but it can give some unexpected character and added drama. 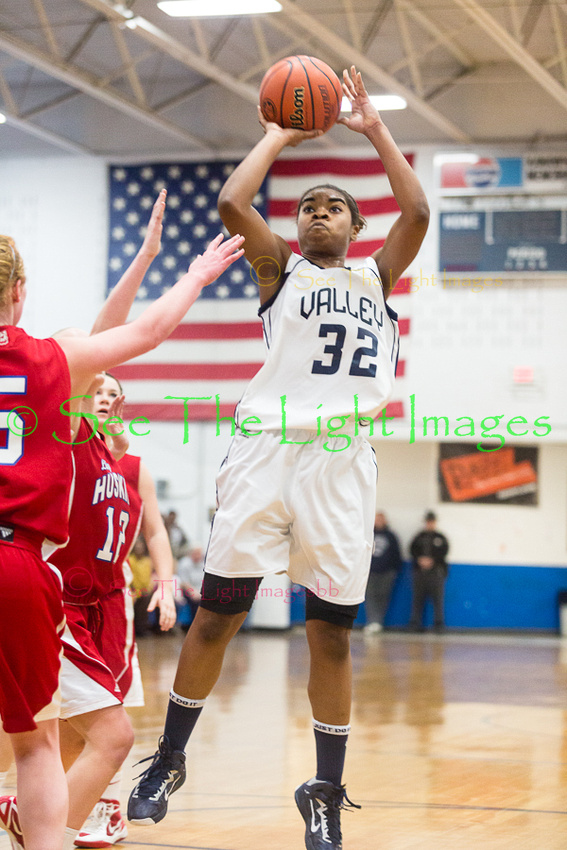 Finally, I managed to get balanced lights by attaching to the conduit on the wall and bouncing off the ceiling to give good, even light to the near side of the court, and usable light to about 3/4 court.  Only downside is that I have to hurry up and move the lights at half time and between games.  That does get to be a bit of a pain, but the light is just soooooo sweet! 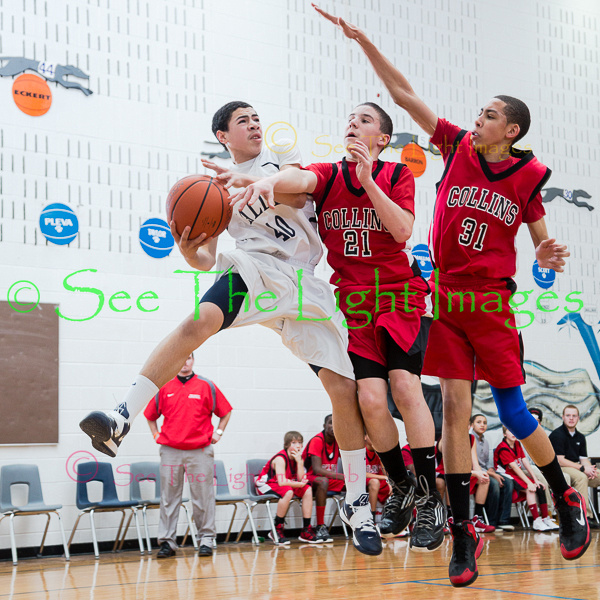 That is the story of lighting one particular gymnasium.  Another gym presents very different requirements.  This shot is using the strobes mounted near the ceiling aimed at the top of the key on the opposite end of the court from where it was taken.  Daytime window light added the backlight I needed.  I upped my ISO from 200 to 500 to shoot down court.   (ISO 500, 2.8, 1/250, 7D) 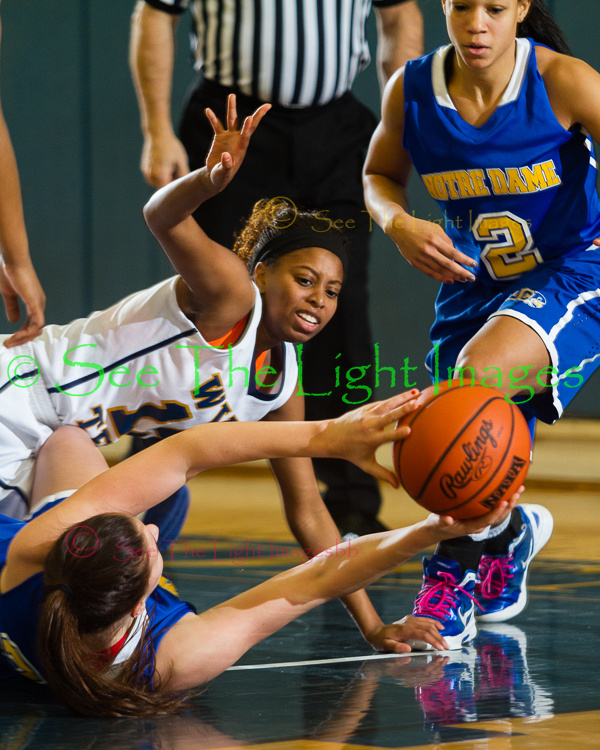 Every gym that I have tried lighting has a unique solution, and I often try different setups.  Each has particular strengths and weaknesses photographically just as they do for the players on the courts.  Thanks to having another photographer around who knows how to use sports strobes, I no longer take any location for granted, even one that I regularly shoot.  My job is to See The Light, where it is, where it is not, where it can be and what it will do.  When I am successful in doing that, I am able to capture the action in front of my lens and hopefully make images that are memorable.